This is not a theme, it's much more!

TailwindCSS Boilerplate theme is not a theme, it's a boilerplate to create some awesome themes with all the developper's tools included: TailwindCSS, Webpack, BrowserSync already configured to build with the OctoberCMS's directory structure, PostCSS with some the majors plugins, PurgeCSS, and all of this managed with NPM.

TailwindCSS, Webpack and PostCSS is already installed and pre-configured to work together. Each configuration file is pre-built but customizable directly from your theme directory.

This boilerplate comes with webpack and fully customised webpack.config.js file for OctoberCMS to manage all your assets: css, javascript, images, fonts and also all your template files: Webpack will walk through all your directories and subdirectories presents in your theme folder to compile the .htm, .html and .txt files to catch all the assets dependencies you may have added in them!

PostCSS is the prepocessor of this boilerplate with the most used plugins. Feel free to add the plugins you want into the postcss.config.js

This boilerplate uses clean-webpack-plugin to ensure you don't have any useless files in your theme folder. Your files is cleaned only on the build process not to slow down the hot reload module.

Be noticed for any update

This Boilerplate is evolving on each update to provide more convenient way to work and fix some webpack's issue. OctoberCMS doesn't support theme update and will probably never support it for many good reasons If you want to be noticed of any update, watch the repository or follow me on twitter @RBilloir: I'll provide a tutorial for any eventual breaking change or new tips available.

The following plugin is required 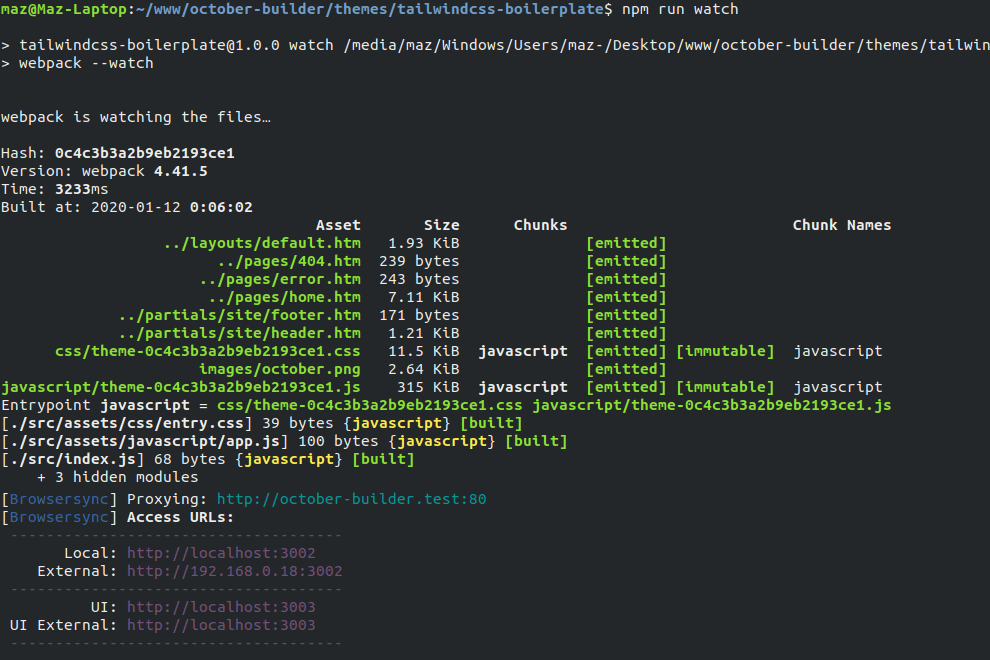 The theme is not prebuilt, when installed. You may see some errors: it's a normal behavior, I wanted from you to understand how to build before actually use and customize it. You have to build it before see it.

First of all: if it's not already the case, be sure to run php artisan october:env, it will create an .env file at the root of your project folder.

Webpack will use APP_URL inside of it to serve the local server with BrowserSync and to correctly sets the paths of the assets. Be sure that it's correctly defined:

The Boilerplate comes with a blank theme in the blank-src folder, and use the boilerplate.yaml configuration file to create the final theme directory. Copy the blank-src directory to the October's themes one.

In the blank-src: you can see a theme.yaml: this it the one for the Source theme, and the new-theme.yaml is the one for... the new theme, obviously. It will be renamed on watch/build process, the two files are needed to differenciate them from the backend.

Again, this theme is not a theme, it's a toolkit, based on NPM. To use it, be sure to have node and npm installed on your machine.

Be aware of the fact that every time you create a new file, it can't be detected by the devServer, you need to reload npm run watch command.